We finally made it to Boston!  Well – we’re actually staying at an RV park in Mansfield, Massachusetts which placed us away from city traffic but close enough to drive into Boston.  Today we drove into Boston to search for  the gravestones of my great great grandparents – William Brown Shackford and his wife Catherine (Mullett) Shackford.

William Brown Shackford’s death records stated that he had died of cancer of the stomach November 21, 1866 and was interred at St Augustine’s Cemetery[i] 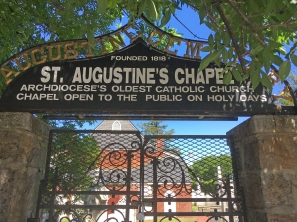 so we reached out to our friend Mr Google and discovered that the St Augustine’s Church and Cemetery was located at 181 Dorchester Street.  We found their phone number and called to learn about accessibility.  Javier wonderfully directed us to two folks, the archivist, Thomas Lester and the chapel who oversaw the church.

We called Thomas and got an answering machine that asked us to place a research request on their WEB page which we did.  We then contacted the oversight church and were told that St Augustine’s was locked except for Saturday services at 4 pm  but a volunteer who works there 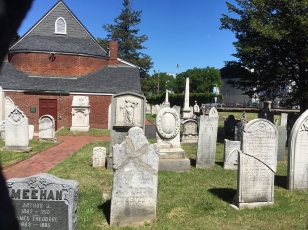 Tuesday might be able to open up the church for us on Tuesday, the day we would be visiting!!!!  Unfortunately we received a follow-up call later that night stating that the volunteer had become unavailable so there would be no access.  We drove to the church anyway and took these pictures of the hapel and the gravestones.

We’re considering coming back on a Saturday from Exeter, NH but will call ahead to see if we can learn more about William’s burial.

Catherine (Mullet) Shackford’s death was reported in the Syracuse Journal on February 3, 1902[ii].  The article stated that her remains were taken to Boston for burial.  The Boston Herald reported that she died at Syracuse and her remains were coming to Boston on Feb 5th for internment in Forest Hills Cemetery[iii].   Before traveling we called and learned that she was buried here.   We arrived at this cemetery  which is beautiful 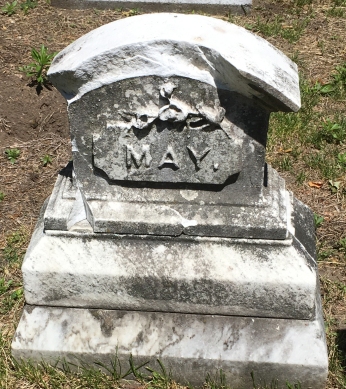 and learned that Catherine and her daughter May Kate Loughrin  who died in 1885 were buried in Lot 932 on the Iris Path and that the plot belonged to Edward W. Rowland — we haven’t yet figured out the connection.  We went to the plot and found a gravestone for May in the right location according to the plot diagram.  We did not find one that could be clearly identified as Catherine’s   Perhaps she didn’t have a gravestone or it went missing.

Even though we didn’t find gravestones for William and Catherine we did find May’s gravestone and we had a wonderful day looking.

We also met up with a cousin, Karen Deborah Shackford Tedeman, my seventh cousin once removed – our common ancestor goes back to William Shackford & Deborah Trickey.  We had a wonderful time discussing our common search for the Shackfords and I learned that her father who was very interested in genealogy named her after Deborah Trickey who is our common ancestor!!!  We visited the grave of her ancestors – George Alonzo Shackford and had a wonderful lunch together!  Hopefully I’ll get to see her again when I go to the New England Genealogical and Historical Society tomorrow.

All posts on this website are a work in progress.  We’d love to learn of any corrections or additions to the information shared.  Also we’d love it if  you’d like the post here or at http://www.facebook.com/shackfordgenealogy) as that helps share the post with others. Thanks!