Ester A MacDonald, known as Essie was the daughter of William Wallace and Pamelia Shackford.  She was born Nov 10, 1866 in Paterson, New Jersey and grew up to become a very popular elocutionist and teacher at the Baptist Church.  On Feb 3, 1892 she married Angus MacDonald, a brother of John MacDonald, a Paterson Alderman.  Unfortunately she died of a hemorrhage about six months after her marriage.

She Dies Suddenly After a Number of
Hemorrhages.

The friends of Mrs. Angus Macdonald
nee Shackford, will be shocked to
hear of her death, which occurred sud-
denly yesterday morning. Mrs. Macdon-
ald had been suffering for some time with
hemorrhages and had been attended by
r Parke. On Saturday she had a bad
one, and in order to prevent the recur-
rence he performed an operation, first
putting his patient under the influence of
ether. The operation was not successful,
and during the night Mrs. Macdonald had
another hemorrhage. Dr. Parke was
called at midnight and found her very
weak from the loss of blood. e put
her under ether, which eased her
sufferings. About 8 o’clock yesterday
morning Mr. Macdonald noticed that his
wife was deathly pale, and thinking some-
thing was the matter rushed to Dr. Mack-
intosh’s office, at the corner of Park ave-
nue and Straight street. The doctor
hastened to the residence of the family on
Ramage avenue, but he was too late.
Mrs. MacDonald had expired.
The death was an awful shock to the
young husband, who was devoted to his
wife, as it was also to her many friends,
for Mrs. Macdonald was known through-
out the city. She was a finished
elocutionist, and Patersonians de-
lighted to hear her. Of late she
has appeared very little in public.
The deceased was a member of the
First Baptist church and for many eyars
was one of the leading mainstays of the
Park avenue Baptist Sunday school,
where she taught a class for eight years.
She had only been married about six
months. Her husband is employed in the
post office.

Ester’s funeral took place at her families home and then according to the Paterson Evening News, twenty coaches filled with mourners followed her remains to the Laurel Grove Cemetery.

Esther A Shackford, the daughter of William Wallace and Pamelia Shackford was born in Paterson, New Jersey on Nov 10, 1866.  We find her in the 1870 and 1880 censuses at ages 3 and 13.  Once we first learned that she also went by the name Essie, we discovered many articles that describe her as the “popular elocutionist and teacher”.

We’re not sure how she met Angus MacDonald, an attache of the Post Office but one of them was considered important enough to have their upcoming wedding mentioned in the New York Herald as a Paterson Society event. However the Paterson Morning Call describes the wedding as if we were present.  Additionally from the article we learn that Essie’s mother Pamelia had recently died (June 14, 1891), that they married in the Presbyterian church but she had been a teacher at the Baptist Church, that her brother Charles Edrick Shackford was best man, and her brother William Wallace Shackford attended the weeding, that her husband’s father was Alexander Macdonald and his brother Alderman John MacDonald. There is also an extensive list of attendees, some of whom may be direct family members. 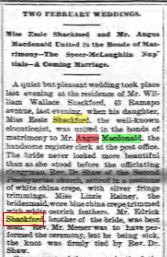 A quiet but pleasant wedding took place
last evening at the residence of Mr. Wil-
liam Wallace Shackford, 43 Ramapo
avenue, last evening, when his daughter,
Miss Essie Shackford, the well-known
elocutionist, was united in the bonds of
matrimony to Mr. Angus Macdonald, the
handsome register clerk at the post office.
The bride never looked more beautiful
than as she stood before the officiating
clergyman, Rev. Dr. Shaw of the Second
Presbyterian church, attired in a costume
of white china crepe, with silver fringe
trimmings. Miss Lizzie Rainey, the
bridesmaid, wore blue china crepe trimmed
with white ostrich feathers. Mr. Edrick
Shackford, brother of the bride, was best
man. Rev. Mr. Meeser was to have per-
formed the ceremony, but he being sick,
the knot was firmly tied by Rev. Dr.
Shaw.
On account of the recent death of the
bride’s mother, the marriage was an un-
ostentatious one, only the immediate
friends and relatives of the family being
present. The members of the bride’s class
in the Park avenue Baptist Sunday school,
which she has taught for the past eight
ears, were present and took an
active part in the festivities. Mr. and
Mrs. Macdonald were the recipients of a
large number of valuable presents, in-
cluding some beautiful pieces of silver-
ware and several handsome pieces of
household furniture. After the ceremony,
the balance of the evening was pleasantly
spent with singing, recitations and danc-
ing. The bride recited a poem, most
fitting to the occasion and held
her hearers spellbound with her
eloquence. A wedding supper was
served after which Mrs. Macdonald don-
ned her traveling costume of helitrope
broad-cloth, with sable trimmings, and in
company with her husband, was driven to
the Erie depot where they took the 11:20
train for a trip down east. They will only
be gone two days, as Mr. Macdonald has
to be back at his post on Saturday, when
the civil examinations occur.
The guests present were: Mr. Alexander
Macdonald, father of the groom; Alderman
John Macdonald, brother of the groom;
Mr. William Wallace Shackford, father of
the bride, Mr. and Mrs. William W.
Shackford, Miss Minnie Campbell, of
Jersey City; Mrs. D. D. Mills and daugh-
ter Nettie, Mrs. Lambert, of Deposit, N.
Y., Mr and Mrs John Brown and daugh-
ter, Miss Marion Phillips, Mr. and Mrs.
Robert Bustard, Miss Bentley, Mr
G. V. Brower and family, Mr. and
rs. John Denton, Mr. and rs
James M. Denton, Mr. and Mrs George
Frost, Miss Fanny Frost, Miss Mary Kane,
r. Harry Sutton, Mrs. James Donald-
son, Miss Lizzie Donaldson, Mr. Edrick
Shackford, Miss Lizzie Rainey, Miss Jen-
nie Denton, Miss Jennie Houston, Miss
Carrie Arentaen, Miss Bateson, Miss
Parker, and Mr. and Mrs. George Garrison
and son.

Unfortunately Essie died about July 24, 1892, five months after her marriage.  She is buried at Laurel Grove in Passaic, New Jersey.

Note:  Listing her death date as approximate because the date in the New Jersey Deaths and Burials database (Jul 27, 1892) is after the date of a newspaper article announcing her death (July 25, 1892) so is probably transcribed incorrectly.